A while ago a hard thing to do took place.  Several board members and officers of the BNC met at the bank during the day, all finding time away from their usual obligations.  They updated their contact information for the BNC’s bank account.  The process turned out to be thorough due to the bank’s updated procedures to prevent fraud.  In the end it was reassuring to see everyone doing their job.  At one point, the bank employee looked at her screen and said, “yep, I see records for you going back to 1986.”

The BNC goes into its 33rd year of pursuing its mission and driving snowmobiles in circles this winter thanks to its members, supporters, and partners.

Remember to join or renew at https://bouldernordic.org/membership-account/membership-levels/ .  A couple weak winters have taken a toll on the BNC’s membership roles and membership is what pays for grooming, The Swap, and everything.

The Swap will probably take place Wednesday November 7th [updated date] in the evening at the Boulder Elks lodge but that will all be confirmed.

The Annual General Meeting (AGM) will take place separately after being a bit of a failure last year in an attempt to integrate it into the Swap.  The AGM is a good time to meet directors in person and elect those directors who then elect the officers for a year term.  Details are yet to be determined.

Let’s hope for snow and those magic days at North Boulder Park and CU South.

2017 Board Elections (AGM) to Coincide with Swap 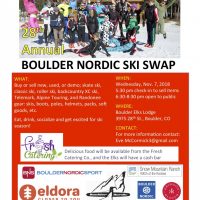